"Walk in U.S., Talk on Japan" in Greater Los Angeles

2020/3/18
The “Walk in U.S., Talk on Japan” program came to Southern California on Feb. 13-14, 2020 as part of a speaking tour that also took delegation members to Colorado and Northern California. Launched in June 2014, the program is a project of the Prime Minister’s Office that aims to engage new audiences in the Japan-U.S. friendship through panel discussions, presentations, roundtables and other exchanges on a grassroots level. The program has taken place in various regions across the U.S., featuring Japanese delegations that represent a wide variety of backgrounds.

The latest delegation, headed by Ambassador SHIRAISHI Kazuko, who previously served as  Ambassador of Japan to Lithuania; Ambassador for Women, Human Rights and Humanitarian Affairs; and Ambassador in Charge of Arctic Affairs. She was joined by Mr. MAEDA Minami, a chief of staff to CEO and vice president at Rakuten Medical, a biotech company engaged in innovative collaboration between the U.S. and Japan, and Mr. TOKUNARI Takeo, a director at Meiwa Co., a company that develops biomass solutions and technologies to address environmental issues such as drought in Africa. Ms. SUZUKI Mayumi, senior staff, risk management division of the Fukushima Prefectural Government, who had originally been scheduled to participate in the delegation, did not travel to the U.S. due to unforeseen circumstances.

Upon arriving in Los Angeles on Thursday, Feb. 13, the delegation made a courtesy visit to the City of Glendale City Council, where they met with Glendale Mayor Ara Najarian and city Councilmembers Paula Devine and Vrej Agajanian. 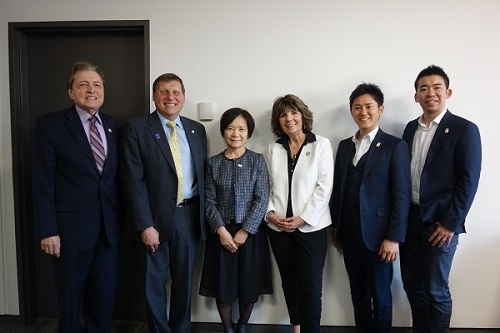 Later that same evening, the delegation held a special presentation, co-presented by the Consulate General of Japan in Los Angeles and JAPAN HOUSE Los Angeles, entitled "The Power of Japan's Innovation: Local, Bilateral and Global Impact" at JAPAN HOUSE Los Angeles. Ambassador Shiraishi presented on Fukushima’s reconstruction progress, while also discussing efforts undertaken in Japan to address gender equality. Mr. Tokunari talked about his experience working on a project in Kenya to convert biomass into drought solutions, while Mr. Maeda presented on how Japanese and U.S. collaboration in the biotech sector is leading to cancer research and clinical trials. The delegation members engaged in a question-and-answer session with the audience, who asked a wide range of questions about the presentations. 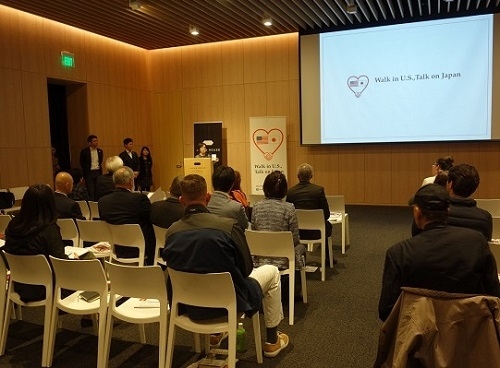 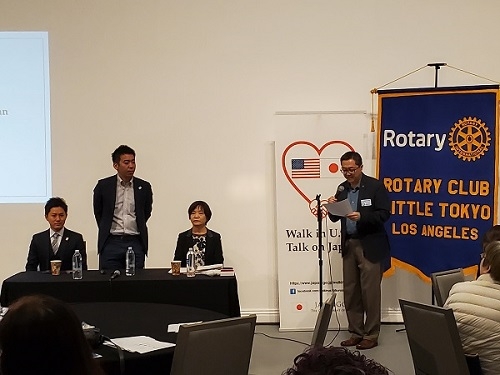 The delegation next headed to the Woodrow Wilson Middle School in Glendale, where they met with 7th and 8th grade students in Japanese classes. The students, who had studied in a Japanese immersion program in elementary school, participated in a brief quiz that tested their knowledge of Japan. The delegation, who conducted their presentation in Japanese, were impressed by the middle school students’ knowledge of Japan and their advanced language skills. 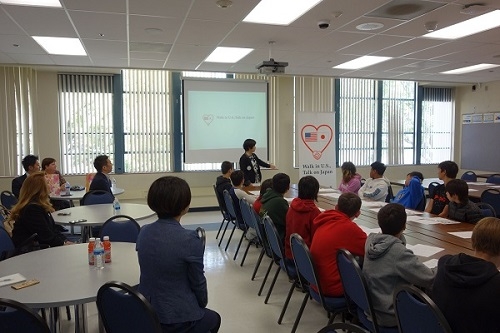 The last and final stop of the day was an interview of Ambassador Shiraishi by Armenian American Broadcasting Corp. in Glendale, CA. 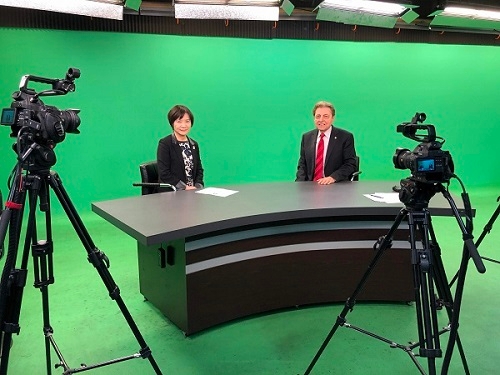