On 28 February 2019, the Consulate General of Japan in Los Angeles, Japan External Trade Organization (JETRO), Los Angeles Office, and JAPAN HOUSE Los Angeles jointly hosted a Shochu and Awamori reception, “Savor Japanese Craft Spirits” at the Official Residence of the Consul General of Japan in Los Angeles. The purpose of this event is to develop business opportunities with the interests created by recent events; the Shochu and Awamori reception targeting influencers and press on 31 January and the month-long promotion for Shochu and Awamori targeting general consumers from February 1st to the 28th, 2019. At the event, four bartenders served cocktails using Shochu and Awamori. And also, four Japanese food trading companies ran booths to explain Shochu and Awamori and introduce their products by offered tastings straight as well as on the rocks. At the booths, Japanese companies interacted with participating American bartenders and restaurant representatives. In order to deepen understanding of Shochu and Awamori, the presentation on Shochu was delivered by Mr. Nishimoto, Chief Executive Officer of JETRO Los Angeles Office, and the presentation on Awamori was delivered by Mr. Yoshi Tome, Owner of Sushi Ran, a high-end Japanese restaurant in San Francisco. After the event, the attending influencers continuously posted about the event through social media. This event also focused on serving Shochu and Awamori cocktails to bring awareness of the potential as a cocktail base, and further promote Shochu and Awamori. A bartender who served Shochu cocktails said, “We, bartenders are always looking for new tastes and genres, so I think Shochu has a great potential in bars in Los Angeles.” And also, a bartender who served Awamori cocktail said, “Cocktail base is normally required to have the characteristic to bring out the uniqueness of the matching food. Awamori can add value to the cocktail.” From the participants, many positive comments were generated as follows; “When we use Shochu and Awamori for the cocktails, such as an “Old Fashioned”, they bring the aroma, taste, and quality which can be equivalent to those of whisky.”, “I could taste Shochu’s sweetness and aroma from the cocktail. There were so many great cocktails that took advantage of unique characteristic of Shochu.” 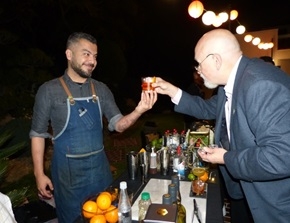