2022/5/11
On Monday, April 25, 2022, the Consulate General of Japan in Los Angeles presented the Commendation of the Consul General to Mr. Yuji Takahashi.

The Commendation of the Consul General was established to recognize an individual or group who has helped advance the mission of the Consulate General and has provided significant contributions to mutual understanding and promoting friendship between Japan and the United States.

Mr. Takahashi has contributed unparalleled cooperation with the local community and Japanese companies for 27 years since 1995. In particular, as Executive Director of the Japanese Business Association (JBA) since 2007, he has contributed to cooperation with the local community, JBA membership companies, and even government officials for 14 years.  In addition, as the Officers and the Board of Directors change every few years, Mr. Takahashi has always been at the center of the JBA’s activities as the Secretary General, and he has steadily undertaken administrative work. For employees of newly joined member companies from Japan and their families, he has responded to their various inquiries and requests, and introduced the appropriate organizations including the Consulate General of Japan and Asahi Gakuen, and also has given sincere consultation and advice. He has been supporting Japanese residents for many years.

At the Nisei Week Festival every summer, the JBA has made various arrangements to co-sponsor the opening ceremony. Also, he worked on the Standing Board of Directors through which the JBA donated $30,000 for the establishment of the "Budokan" at the Little Tokyo Service Center. Mr. Takahashi has played an important role for the JBA to maintain and strengthen its cooperation with Japanese society.

The Commendation of the Consul General has been presented to Mr. Takahashi in recognition of his significant contributions to the Japanese American and Japanese communities. 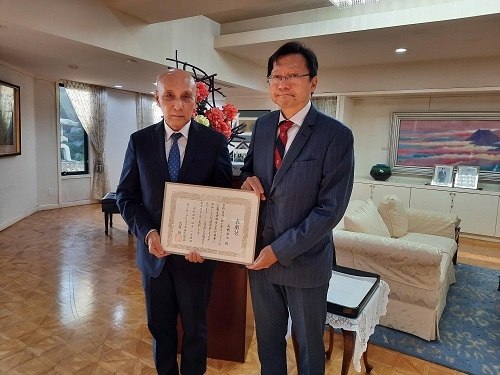