2022/5/10
Consul General of Japan in Los Angeles MUTO Akira made a speech at the Japanese American National Museum (JANM)’s opening reception for its new exhibition “BeHere/1942: A New Lens on the Japanese American Incarceration” on Friday, May 6, 2022. Consul General Muto congratulated JANM on its 30th anniversary and the opening of the new exhibition. He also extended his heartfelt sympathies to family members, friends, and supporters of Secretary Norman Y. Mineta, the Chair of the Board of Trustees for JANM, who passed away on May 3.

Opening exactly 80 years after that Saturday in May when Little Tokyo’s streets were emptied, this exhibition mobilizes a variety of media forms to let visitors engage in new ways with this dark historical moment such as cutting-edge augmented reality (AR) technology, which invites visitors to become photographers themselves, actually participating in the scene. The exhibition was created by the visionary Japanese media artist Masaki Fujihata and co-presented by JANM and the Yanai Initiative for Globalizing Japanese Humanities at UCLA and Waseda University, Tokyo. 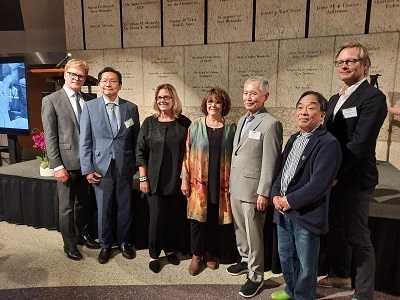