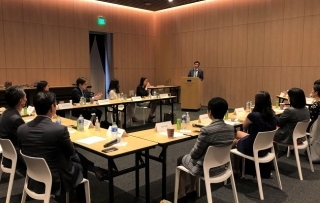 On April 14, the politics subgroup of the LA Next Generation Japanese American Leaders held a roundtable discussion with California Special Assistant Attorney General James Toma at JAPAN HOUSE Los Angeles.  Mr. Toma currently serves as a legal and policy advisor to California State Attorney General Rob Bonta on health matters and as lecturer at the UCLA School of Law.  Consul General Akira Muto also attended the roundtable and exchanged views with the participants.

Mr. Toma shared his past experience serving as Mayor and City Councilmember for the City of West Covina and advised the next generation leaders on pathways to entering politics and how the Japanese American community can further promote political engagement in the community.  Mayor Jeff Maloney of the City of Alhambra and newly appointed Trustee Dr. Kelsey Iino of the Los Angeles Community College District Board of Trustees were also in attendance and shared their advice and views.