2022/2/25
On November 3, 2021 (Japanese Standard Time), the Government of Japan announced the recipients of its Fall 2021 Decorations. From the jurisdiction of the Consulate General of Japan in Los Angeles, Mr. David Ono received the Order of the Rising Sun, Gold Rays with Rosette.

The conferment ceremony for Mr. Ono was held on Friday, February 18, 2022. Due to the COVID-19 restrictions, the ceremony was held at the Consul General's Official Residence with a limited number of guests. 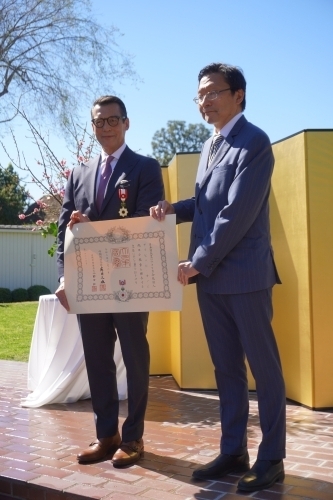 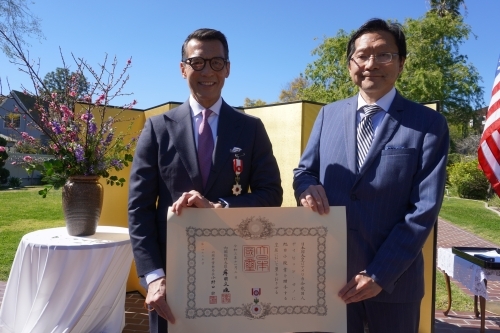 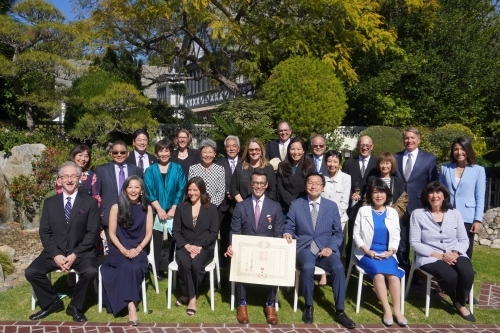 Mr. David Ono, evening anchor for ABC7 Eyewitness News, the top-rated news program in Southern California, has produced and broadcasted a wide array of programs about Japanese and Japanese American issues. His work is highly acclaimed and has received numerous awards.  As a journalist David has made a significant contribution to promoting the understanding of Japan in the United States.

In 2010, at the request of the Go For Broke National Education Center that documents and teaches the war experience of Japanese American soldiers, Mr. Ono produced a documentary called “Unknown Warriors of World War II". It features the brave fight by Nisei soldiers in Europe during World War II and the immense gratitude from the European citizens who were liberated by these brave soldiers. The documentary, which aired on his news program on ABC7, was a huge hit and was also aired on PBS station across the country. The documentary won three Emmy Awards and an Edward R. Murrow Award, one of the most prestigious awards in the journalism industry.

In 2014, Mr. Ono produced "The Legacy of Heart Mountain", a documentary based on 2000 photographs secretly taken during World War II depicting life in a Japanese American internment camp. David shined a light on the difficult and often tragic results of living in this rugged place, but also showed the spiritual strength and friendship cultivated in adversity. “The Legacy of Heart Mountain” won the Edward R. Murrow Award and four Emmys. It was broadcasted on ABC7 and PBS as well as screened at the National Museum of American History, part of the Smithsonian Institution, helping to educate Americans about a chapter in history that has been largely ignored.

In 2011, Mr. Ono immediately flew to Japan after learning about the devastating earthquake and tsunami that occurred in Tohoku. His timely reports helped inform Americans of the dire situation in Japan as the country dealt with the unprecedented disaster. One year later, he went back to Tohoku where many scars remained. He reported on the reconstruction efforts as well as amplified local voices who were still in desperate need of help through his news program. In 2021, David moderated the 10th anniversary memorial online event co-sponsored by Japan House Los Angeles and Love to Nippon. He also made it available live on the ABC7 website.  He emphasized the need to apply the lessons learned in Japan to the Los Angeles area, an earthquake-prone zone similar to Japan.

David created Emmy Award winning reports on the 70th and 75th anniversaries of the atomic bombing in Hiroshima, detailing the horrible catastrophe and conveying the message that such a tragedy should never be repeated.

In spite of his busy schedule as an anchor, he remains active in supporting local Japanese organizations and communities through attending numerous Japan-related events as an emcee, moderator or speaker throughout the year.