COVID-19 Lessons from Japan and Mexico: Culture and the Responses to the Pandemic

2020/7/27
Japan and Mexico share more in common than you might think. Known to be family-oriented, both societies celebrate their respective Day of the Dead to pay respect to their ancestors. Historically, the exchange between the two countries span over four centuries. Here in Southern California, Japanese and Mexican communities share immigrant stories from back in the day.

Fast forward to 2020, both peoples are now fighting against COVID-19, together with the rest of the world. Let us look at various aspects of culture and society of Japan and Mexico, which may have impacted their efforts to protect themselves from the pandemic.

Consul General of Mexico in Los Angeles Marcela Celorio will speak about the work that the Mexican consular network has done during the COVID-19 crisis to support the community.

Joining them is award-winning journalist and prime-time anchor, Palmira Pérez, who grew up in the City of Guadalajara, Jalisco, and currently serves on the steering committee of JAPAN HOUSE Los Angeles. Palmira will share findings from her trip to Japan from her unique perspective.

The session will be emceed and moderated by KAIFU Yuko, President of JAPAN HOUSE Los Angeles. 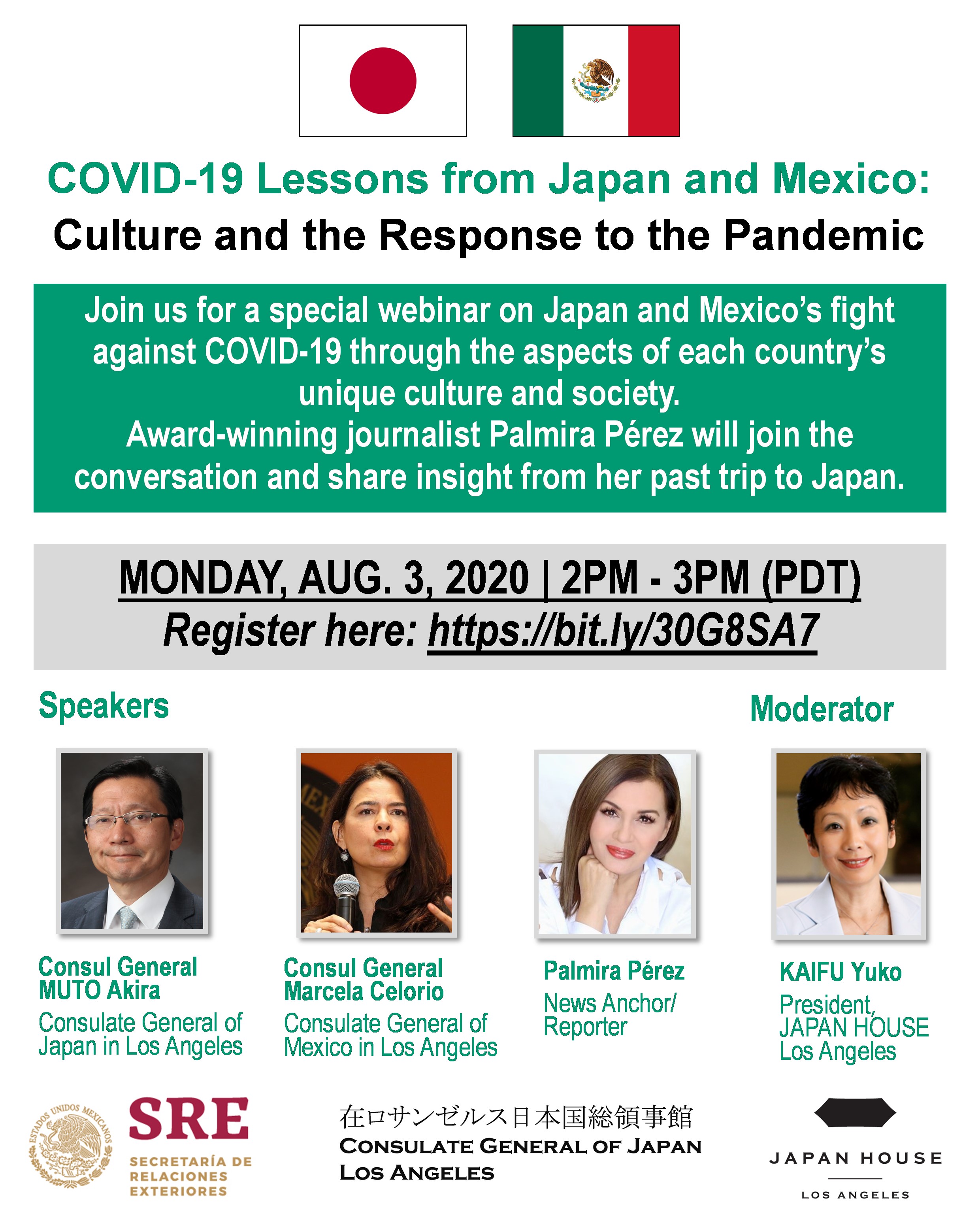 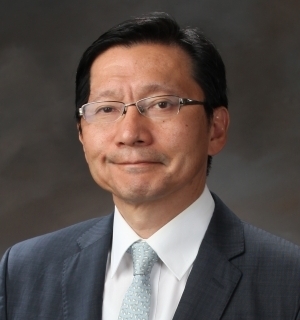 Consul General MUTO Akira graduated from the Faculty of Economics, University of Tokyo and joined the Ministry of Foreign Affairs in 1985. Having served at the Embassies of Japan in Washington DC and Moscow, he held directorships for Free Trade Agreement & Economic Partnership, Intelligence & Analysis, Russian Affairs, and Foreign Policy Coordination between 2004 and 2012; and in 2012, he became Consul General of Japan in Boston. He served as Deputy Director General, European Affairs Bureau (Ambassador, 2014-15); and served in the National Security Secretariat (2015-16). Born in Mexico City, Consul General Marcela Celorio is an Attorney from the Escuela Libre de Derecho, with a Master’s Degree in Diplomatic Studies from the Matias Romero Institute (IMR, by its Spanish acronym) and a Master's Degree in Security and Defense from the National Defense College, of the Ministry of National Defense (SEDENA, by its acronym in Spanish).

She continued her academic studies at the Center for U.S.-Mexican Studies at the University of California in San Diego (UCSD) and was the first Diplomat in Residence from the Mexican Foreign Service at the American University (AU) in Washington, DC.

In 1999, she joined the Mexican Foreign Service as a Diplomatic Attaché and followed rigorously the ladder of ranks to become Ambassador.

She has served as Director of Nationality and Naturalization at the Ministry of Foreign Affairs, a position from which she helped to craft the constitutional reform of 1997 which made legal dual or multiple nationalities for Mexicans.

Subsequently, she was appointed Director of Protection Policies, a position in which she facilitated the implementation of the border liaison and consultation mechanism between Mexico and the United States. In 2000, she was designated Director for the United States of America at the Foreign Affairs Ministry.

Between 2000 and 2001, she taught International Public Law at the Universidad Iberoamericana (UIA by its Spanish acronym). She has done research and written about issues related to dual nationality and citizenship, and national security and integration of North America. She speaks English fluently and has knowledge of French, Italian, and Hebrew.

Abroad, she was assigned to the Embassy of Mexico in the United States of America as Chief of Staff from 2002 to 2006. In September of 2006, she was detailed to the Ministry of the Interior as Deputy General Director for the North American region.

From 2009 to 2012, she served as Deputy Chief of Mission in Israel and Counselor for Economic, Commercial and Cooperation Affairs. In 2012, she was appointed as Counselor for Political Affairs at the Mexican Mission to the European Union.

On April 28th of 2017, she was promoted to the Rank of Ambassador of Mexico, and became the first Ambassador graduated from the Escuela Libre de Derecho.

On June 24th, she took office as the Consul General of Mexico in Los Angeles, California, after presidential nomination and Senate ratification. Four time Golden Mike®winner and 5 time Emmy Award winner Palmira Pérez is one Los Angeles’ most trusted television news anchors. Her proven track record of breaking news stories and producing award winning news specials make her one of the most exciting TV personalities. From covering national elections, traveling the world to film tv specials, hosting the Rose Pa- rade, Fiesta Broadway, Lakers and Dodgers Parades and the Los Angeles Marathon, Palmira Perez is considered one of the most recognized and influential Hispanic journalists.

Pérez’s journalistic work has earned her four Golden Mike Awards from the Radio & Television News Association of Southern California (RTNA). The Golden Mike Awards are Southern Cali- fornia's most prestigious broadcast journalism prize. Add to that 5 Emmy awards for her work as a journalist and reporter for Univision Bay Area. With 10 nominations for her groundbreaking work in feature reports, special news reports and investigative reports, she was the most nominated woman in the Northern California Chapter of the 2019 Emmy Awards.

With 20 years of television experience in Mexico and the United States, Palmira was most recently the anchor of the 6:00 p.m. and 11:00 p.m. newscasts on Spanish-language station KDTV Univision14 San Francisco-Bay area . Before that she was news anchor in KWHY-22 for 16 years where her tv newscast Was the highest rated among male viewers in Southern California

Pérez has interviewed some of the world's most influential figures including Israel Prime Minister Benjamin Netanyahu, Mexican Presidential candidate Josefina Vazquez Mota, Mexican President Vicente Fox and Jaime Labastida. She has also interviewed such iconic figures and multiple Singers. In June of 2012 it was Palmira Perez who made the historic announcement that KWHY-TV. Channel 22 will be the flagship station for the new Fox Spanish language network “MundoFox”.

Her extensive charity and mentoring work includes volunteering her time to The Mayte Prida Foundation, Latinas Lighting the Way for the Los Angeles Unified School District, Padres Con- tra El Cancer, The Girls Today Women Tomorrow Foundation and The Boys & Girls Club among many others.

She is a principal of “ 3 Wise Latinas “ which is creating the healthiest generation of Latinas in history and provide women of all ages with empowering content for a fulfilling quality of life.

She is a member of the National Association of Hispanic Journalists (NAHJ) as well as the President of the Alumni Association University of Guadalajara in Los Angeles. She is a member of the IME Advisory Council (CCIME), which functions as advisors and counselors to the Institute of Mexicans living in the United States. She is a board member of “ University of Guadalajara Foundation USA “. Most recently she was appointed a Board member at Japan House in Los Angeles, representing the latino Community fostering relationships and good will with Japan.

Prior to joining JAPAN HOUSE Los Angeles in January 2016, Ms. KAIFU Yuko was Managing Director in the Corporate Communications Department of MUFG Union Bank, owned by the Bank of Tokyo-Mitsubishi UFJ, where she was charged with media relations, internal/external publications of the bank, and with CSR activities for the Japanese and Japanese American communities and for the US-Japan relations.

She started her career at the Ministry of Foreign Affairs of Japan. Her past assignments include the Embassy of Japan in Canada, North American Affairs Bureau, Economic Cooperation Bureau, Foreign Policy Bureau, and Cultural Affairs Department, where she was Deputy Director in Tokyo. During her service at the Ministry, she was appointed official interpreter for Her Majesty the Empress, Prime Minister and Foreign Minister of Japan.