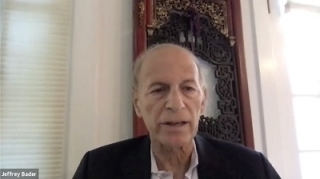 Ambassador Jeffrey Bader
On Monday, November 30, 2020, the Consulate General of Japan in Los Angeles and JAPAN HOUSE Los Angeles co-presented a webinar entitled “Challenges facing a Biden Administration in Asia.” Ambassador Jeffrey A. Bader, Senior Fellow of Foreign Policy in the John L. Thornton China Center at the Brookings Institution was the main speaker who spoke on challenges that Asia poses for the incoming Biden administration and what kind of policies the new administra-tion may pursue. Consul General of Japan MUTO Akira moderated the conversation.

From 2009-2011, Ambassador Bader was a special assistant to the president of the United States for national security affairs at the National Security Council. He is currently not involved with the Biden campaign and does not plan to join the administration.

Ambassador Bader began the lecture by stating that the top priorities of the Biden administration will first and foremost be domestic policy including managing the COVID pandemic and ad-dressing racial disparities and inequities.

Outside of domestic policies, the U.S. will need to compete strategically with the growing super-power China in order to maintain its influence on an international scale. Ambassador Bader noted that the relationship between the two nations will be a challenging and important one.

After Ambassador Bader’s talk, Consul General Muto and the audience posed several questions including China’s relationship with other countries as well as areas of cooperation with the U.S. allies regarding China-related issues."