2019/6/28
On Thursday, June 6, 2019, Consul General Akira Chiba attended the "2019 Select LA Investment Summit" organized by the World Trade Center Los Angeles (WTCLA). During the 'LA on the International Stage' session where he participated as a panelist, topics including the reasons international businesses come to Los Angeles, the business opportunities in the Green economy, the impact of recent changes in the trade environment were discussed. Consul General Chiba commented "The size of the market; access to industries such as aerospace, pharmaceuticals and entertainment; considers itself the fifth largest economy in the world – Japanese businesses want to be here. Japan has a series of MOUs with the state of California on collaborating on green technologies. Regarding the trade with the US, we are still asking for tariffs on steel products to be lifted. Japanese companies operating in the US contributed to US’s foreign export."

At the summit, the "Foreign Direct Investment in Southern California, 2019" report was released. It showed that about 10,305 companies from over 24 countries and regions were invested in Southern California and created 425,576 jobs. Among them, Japan is the largest with 2,407 foreign owned enterprises and 81,751 employees, and ranked 1st for the fourth straight year.

Moreover, Honda North America was awarded the 2019 Foreign Direct Investment Award in honor of its significant contributions to the local economy. Honda North America established its first overseas subsidiary in Los Angeles in 1959, and it has invested more than $2 billion in the region, and employs approximately 2,000 employees. 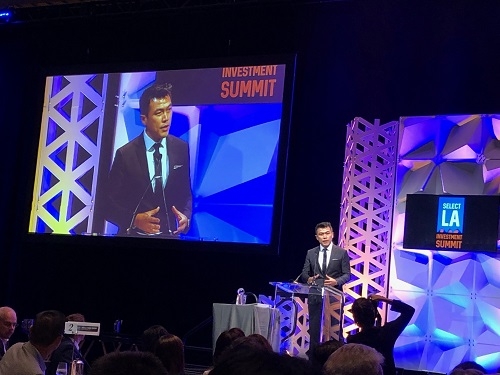