2019/10/29
On May 21, 2019, the Government of Japan announced the recipients of its Spring 2019 Decorations and within this Consulate General’s jurisdiction, Dr. Henry H. Takei received the Order of the Rising Sun, Gold Rays with Neck Ribbon.

When Dr. Henry H. Takei was a Clinical Professor, Section of Periodontics, School of Dentistry, University of California, Los Angeles (UCLA), he collaborated with Meikai University and Asahi University, and established a Cultural Student Exchange Program with UCLA in 1993. This program became a UCLA permanent program, and a total of 385 students and lecturers have participated until now. Dr. Takei contributed to guiding and training researchers in the field of periodontics, and promoting academic exchange between Japan and the United States.

Since 1973, Dr. Takei has been lecturing at several educational institutes and Universities in Japan. He has been giving lectures nearly annually in many places in Japan including Tokyo, Saitama, Yamagata, Yokohama, Fukuoka, Osaka, Nagoya, Chiba, Niigata, Kobe, Kagoshima, and Kyoto. He has visited Japan more than 50 times over 46 years to 2018. These lectures were precious opportunities to provide the leading-edge education to thousands of dentists throughout Japan, and contributed to the development of the field of periodontics, especially in periodontology and implant therapy.

Dr. Takei is one of the four editors of "Carranza’s Clinical Periodontology," which is widely used in the world and recognized as a culmination of periodontology studies to date. He also wrote "Periodontics and Implant Therapy" published in Japan, which is considered a must-read book for young dentists. These publications were translated in Japanese and utilized at educational institutes, and contributed to developing the field of periodontics in Japan.

Dr. Takei had a private dental practice in Los Angeles downtown where many Japanese live and work, and has treated Japanese patients from inside and outside of the United States. He provided dental treatments in both Japanese and English language to Japanese living overseas as well as Japanese Americans, and contributed to the improvement of health and hygiene of the Japanese community.

The Conferment Ceremony for Dr. Takei was held on October 15, 2019 at 2pm at the Official Residence of the Consul General of Japan and was attended by approximately 45 guests, including Dr. Takei’s family and friends. After the Ceremony a reception was held, which was enjoyed by all the guests. 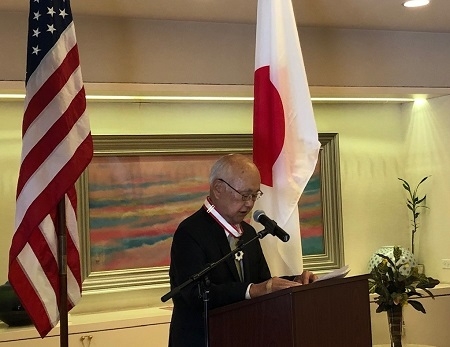 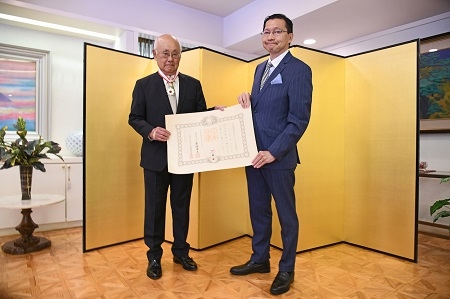