2019/11/20
The Consulate General of Japan in Los Angeles held a ceremony for the conferment of the Foreign Minister's Commendation upon Mr. Fumio Demura, chairman of the Shito-ryu Karate-do Genbu-kai, on Wednesday, November 13, 2019.

Consul General Akira Muto praised Mr. Demura's accomplishments and presented him with a certificate from the Foreign Minister of Japan.

The Foreign Minister's Commendations are awarded to individuals and groups for outstanding achievements in international fields and to acknowledge their contribution to the promotion of friendship between Japan and other countries. The Commendation also aims to promote understanding and support from the Japanese public for the activities of the honorees.

Born in Yokohama, Japan, Mr. Demura studied karate, Ryukyu kobu-do, batto-do and iai-do in Japan. In 1961, he took first place in the All-Japan Karate Championships. He moved to the United States in 1965 to teach karate, serving as Chief Instructor at Karate-do Ito-su Kai. He was also instrumental in introducing Ryukyu Kobu-do to the U.S. From 1969 to 1974, Mr. Demura performed karate demonstrations at Japanese Village & Deer Park located at the time in Buena Park, CA, introducing the martial art to the general public.

In 1971, Mr. Demura published Nunchaku Karate – Weapon of Self Defense, the first of many books that drew widespread interest and helped spread techniques for nunchaku and other weapons training in the United States. His teachings drew the interest of martial artists, including Bruce Lee, whom Mr. Demura instructed on the use of nunchaku. Bruce Lee’s popular film Enter the Dragon featured nunchaku, which contributed to growing awareness of Ryukyu Kobu-do in the United States and worldwide.

Mr. Demura’s martial arts expertise can also be seen in the entertainment industry. In the original Karate Kid film series, Mr. Demura served as a stunt double for the beloved Mr. Miyagi character. He was a founding member of the Japanese Karate Masters Association of North America, eventually serving as its chair. In 1999, Mr. Demura founded Shito-ryu Karate-do Genbu-kai, currently at the 9-dan level and serving as its Chairman. In 2015, his many accomplishments were presented in the Netflix documentary The Real Mr. Miyagi, which followed his life history and featured numerous Hollywood and martial arts heavyweights who drew inspiration from him.

Mr. Demura has received countless honors and awards in recognition of his contribution to the world of martial arts. He was inducted to the Martial Arts History Museum Hall of Fame in 1999, and won Black Belt Magazine’s Lifetime Achievement Award twice (in the years 2000 and 2018). In July 2013, the Nisei Week Foundation honored Mr. Demura as a Nisei Week Pioneer, recognizing his many contributions to the world of martial arts, including a strong dedication to teaching students and spreading awareness about martial arts.

The award ceremony which conferring the Foreign Minister’s Comendation upon Ms. Fumio Demura took place on Wednesday, Nov. 13, 2019 at the Official Residence of the Consul General of Japan, with Mr. Demura’s family members, friends and students in attendance. In conferring the Commendation to Mr. Demura, Consul General of Japan in Los Angeles Akira Muto outlined his achievements, including the promotion of karate and other martial arts through instruction and through his contribution to the entertainment industry. Mr. Demura spoke of his recovery from illness, and shared his appreciation for all the support he received from his family, friends and students.

After a commemorative photograph, the attendees enjoyed a reception with Consul General and Mrs. Muto. 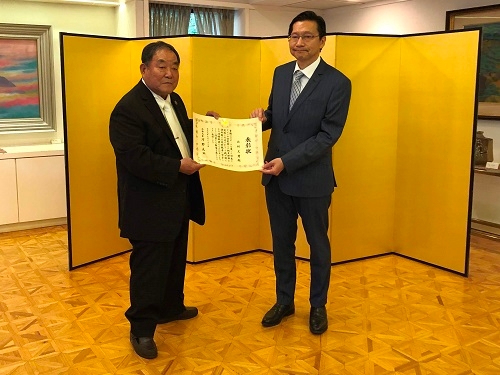 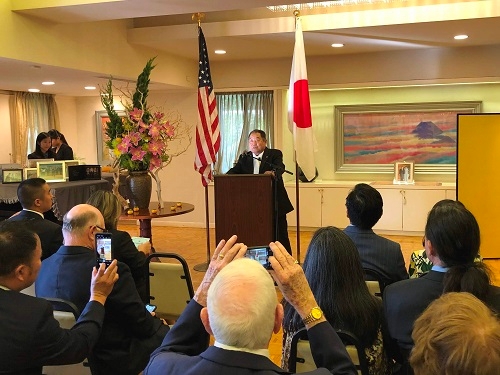 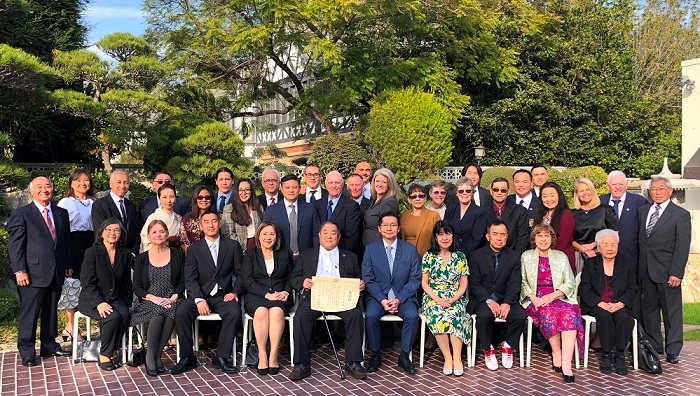