The Consulate General of Japan in Los Angeles held a conferment ceremony for the Foreign Minister’s Commendation in Honor of the 70th Anniversary of the End of the War for Mrs. Soyu Yuriko Tanaka, Advisor for the Omotesenke Domonkai Southern California Region on Wednesday, December 9. Consul General Harry H. Horinouchi praised Mrs. Tanaka’s accomplishments and presented her with a certificate from the Foreign Minister of Japan.

The Foreign Minister’s Commendation in Honor of the 70th Anniversary of the End of the War is awarded to individuals and groups of outstanding achievements in the promotion of friendship between Japan and the United States.

Mrs. Tanaka was born in 1933; she graduated from Meiwa Woman’s Jr. College in Sendai City. In 1957, she married and came to the United States. She received her Omotesenke teaching credential in 1973, before receiving the highest professional rank from the Omotesenke Headquarters in Japan in 1988. Through her own tea group with students, known as Yuwakai, and tea ceremony classes, Mrs. Tanaka has actively promoted the study and appreciation of tea ceremony in Southern California.

An active member of Omotesenke Domonkai Southern California Region since its establishment in 1970, Mrs. Tanaka has served in important positions including Executive Director, Vice President and Advisor, contributing to the organization’s growth. She has also taken on such responsibilities as Chairperson of Omotesenke Domonkai’s anniversary events and other high-profile gatherings, guiding them to success.

Mrs. Tanaka received from the Omotesenke Headquarters the “Shibu Koro-sho” (Special Award) in 1999 and the “Shibu Tokubetsu Koro-sho” (Distinguished Award) in 2001 and 2010 for her many years of devoted and outstanding service.

In addition, Mrs. Tanaka has served as a Vice President and Advisor to the Japanese Women’s Society of Southern California, and she received their “Tokubetsu Koro-sho” (Special Award). She also volunteers for Keiro Home visits, Nisei Week events, the year-end welfare collection (Saimatsu Tasukeai Bokin), and other philanthropic causes. In addition to those activities, she helped the community through tea. She received the 2009 Community Service Award from the Orange County Japanese American Association. In 2011, she was selected Woman of the Year by the Japanese American Citizens League, Downtown Los Angeles Chapter and the Japanese Women’s Society of Southern California. Her accomplishments have been recognized with certificates from the Mayor of Los Angeles and the Los Angeles County Board of Supervisors.

The award ceremony to confer the Foreign Minister’s Commendation upon Omotesenke Domonkai Southern California Region Advisor Mrs. Soyu Yuriko Tanaka took place on Wednesday, December 9 from noon at the Official Residence of the Consul General of Japan, with Mrs. Tanaka’s daughter Mrs. Risa Uyematsu and fellow members of the Southern California Region in attendance.  In conferring the Commendation on Mrs. Tanaka, Consul General of Japan in Los Angeles Harry H. Horinouchi outlined her achievements over many years in popularizing tea culture and providing for its transmission to the next generation. In turn, Mrs. Tanaka spoke about her happiness in receiving the award and shared her appreciation for her husband Fred and daughter Risa; then, in thanking the members of the Domonkai Southern California Region, she related some heartwarming episodes about their journey together contributing to the spread of tea practice. After the award ceremony ended with words of congratulations and a toast from Domonkai Southern California Region President Mr. Mack Miyazaki, the attendees enjoyed lunch with Consul General and Mrs. Horinouchi. 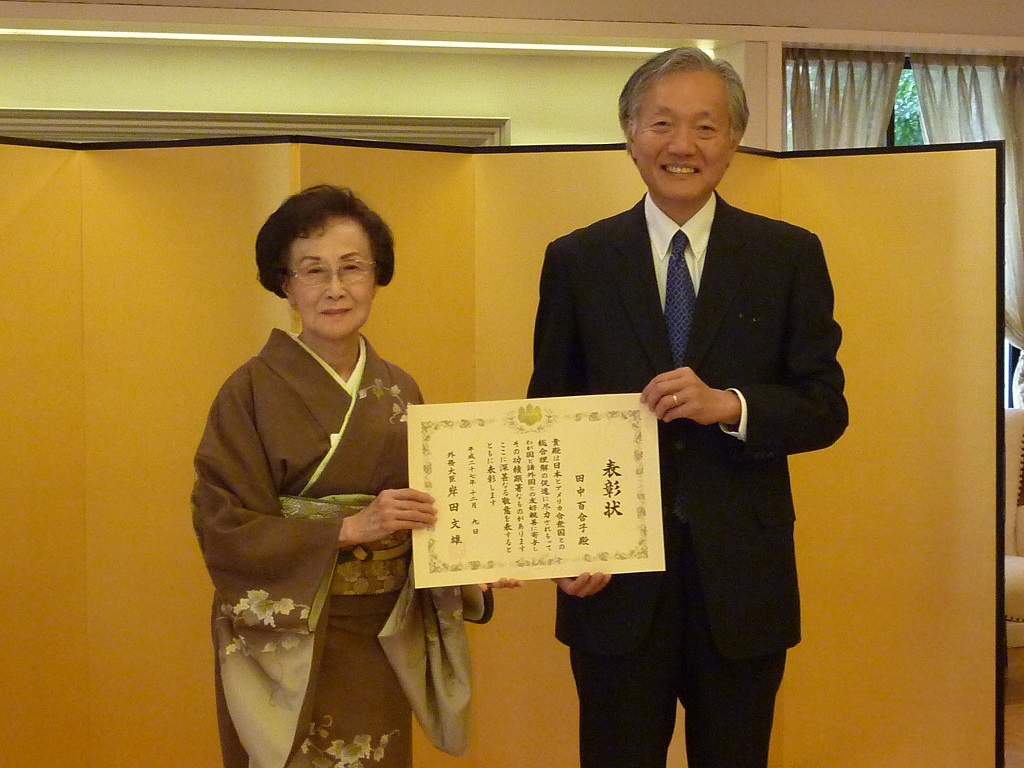 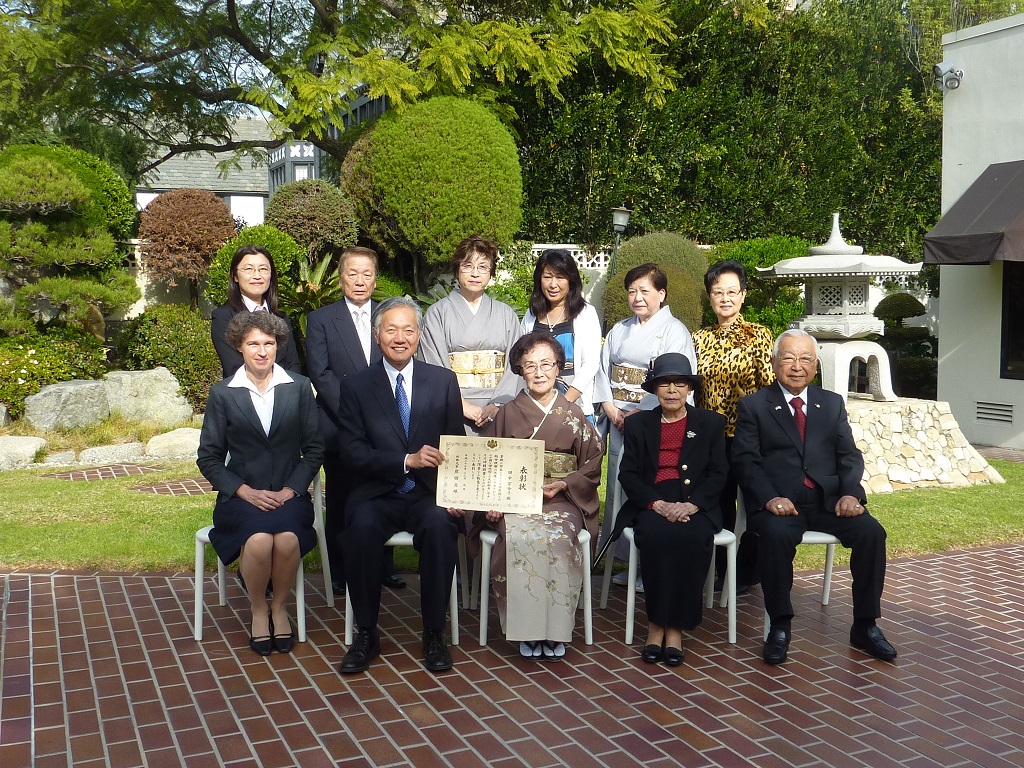 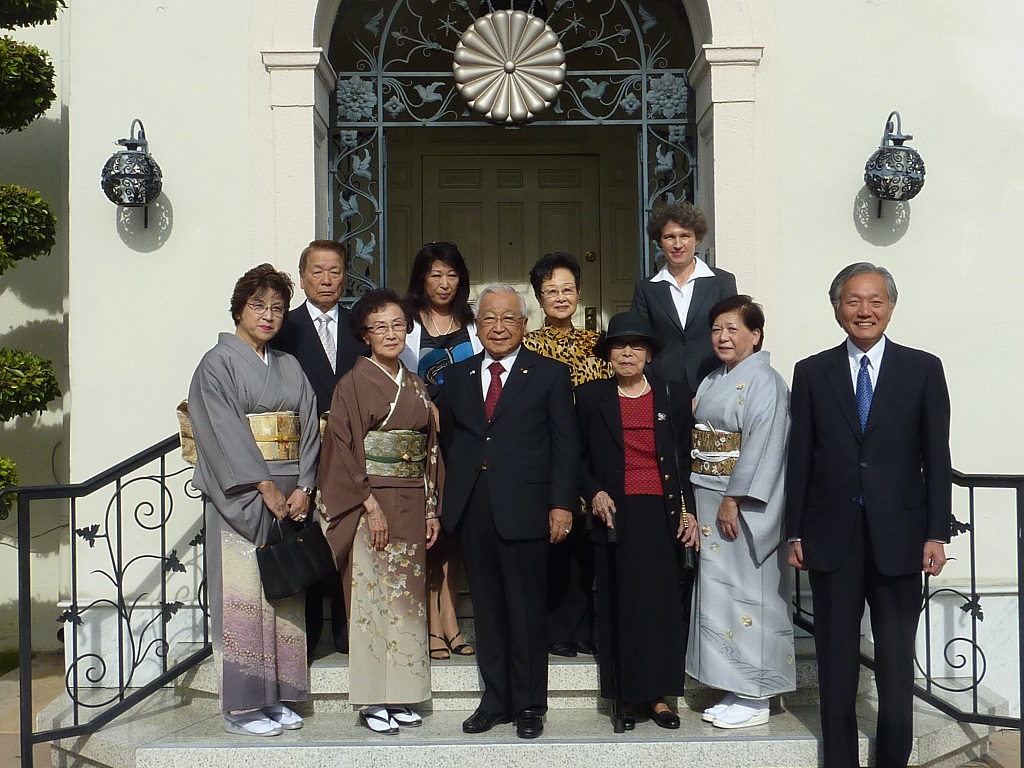