Foreign Minister's Commendation in Honor of the 70th Anniversary of the End of the War Conferred on Mrs. Soyu Yoshiko Koizumi

2016/1/4
The Consulate General of Japan in Los Angeles held a conferment ceremony for the Foreign Minister’s Commendation in Honor of the 70th Anniversary of the End of the War for Mrs. Soyu Yoshiko Koizumi, Advisor for Chado Urasenke Tankokai Orange County Association, on Monday, December 7. Consul General Harry H. Horinouchi praised Mrs. Koizumi’s accomplishments and presented her with a certificate from the Foreign Minister of Japan.

The Foreign Minister’s Commendation in Honor of the 70th Anniversary of the End of the War is awarded to individuals and groups of outstanding achievements in the promotion of friendship between Japan and the United States.

Mrs. Koizumi was born in 1931, came to the United States to study in 1953, and graduated from Los Angeles City College. She began practicing tea ceremony in Japan and resumed it after moving to the United States, this time under Madame Sosei Matsumoto. Mrs. Koizumi, along with Mme. Matsumoto, promoted the study of tea ceremony as members of the Urasenke Los Angeles Chapter, the predecessor to the current Urasenke Tankokai Los Angeles Association. Mrs. Koizumi nurtured the organization’s growth and enthusiastically promoted the art of tea ceremony during her tenure as Vice Chief of Administration and other positions. She did this while teaching at Japanese language schools and serving as principal in one of them.

In 1988, Mrs. Koizumi helped establish the Chado Urasenke Tankokai Orange County Chapter (now Association). She has since served in such positions as Director and Advisor. In 2010, Zabousai (Grand Master) accorded Mrs. Koizumi the highest rank of Honorary Professor and Advisor. In 2004, Mrs. Koizumi was selected Woman of the Year by the Japanese American Citizens League, Downtown Los Angeles Chapter and the Japanese Women’s Society of Southern California. In 2014, the Orange County Japanese American Association awarded her the“Korosha-sho.” She continues to teach Orange County Chapter members at her own tea house, which she also opens to the public, organizing a program that allows local students in the community to experience chado, and thus promoting cultural exchange among the next generation. In such ways, Mrs. Koizumi has helped to cultivate and spread the way of tea in Southern California for a half century.

The award ceremony to confer the Foreign Minister’s Award upon Chado Urasenke Tankokai Orange County Advisor Mrs. Soyu Yoshiko Koizumi took place on Monday, December 7 from noon at the Official Residence of the Consul General of Japan, with fellow officers from the Tankokai Orange County in attendance. In conferring the Award to Mrs. Koizumi, Consul General of Japan in Los Angeles Harry H. Horinouchi outlined her achievements over many years in popularizing tea culture and providing for its transmission to the next generation. In turn, Mrs. Koizumi spoke about her happiness in receiving the award and shared her appreciation for the all the support she received up to this point from her family and fellow officers in the Tankokai Orange County. Tankokai Orange County President Mr. Toshio Handa then led the entire group in a toast to Mrs. Koizumi in her conferment of the award and to her health, and moreover invoked good wishes for her future activities and undertakings. After a commemorative photograph, the attendees enjoyed lunch with Consul General and Mrs. Horinouchi. 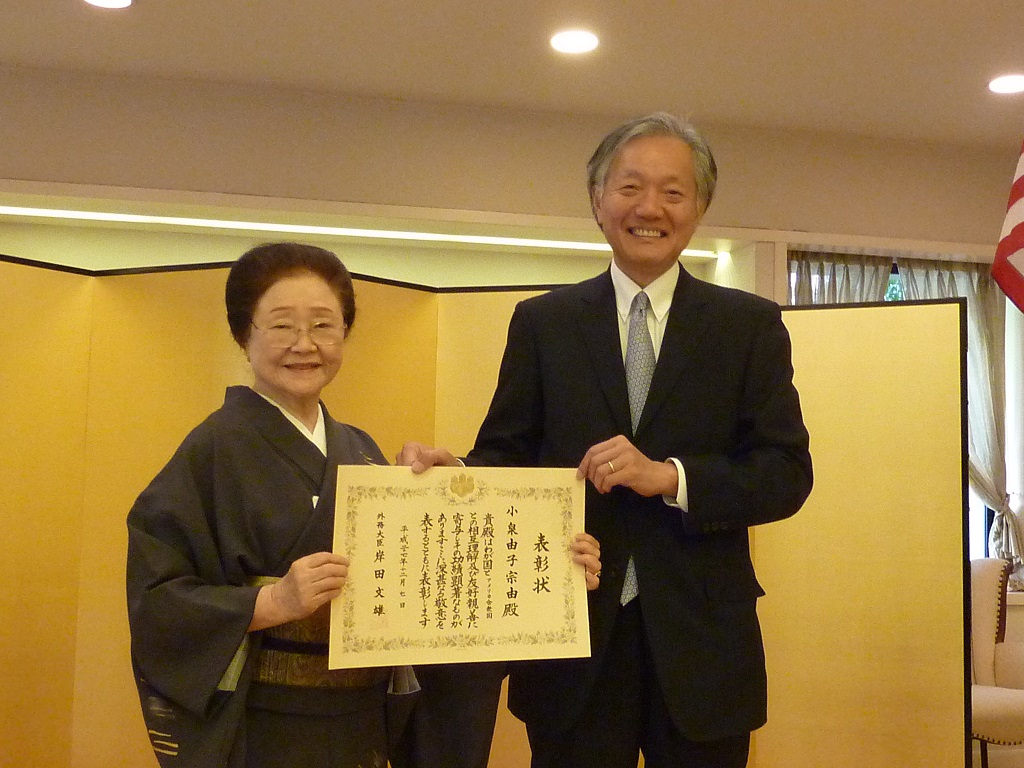 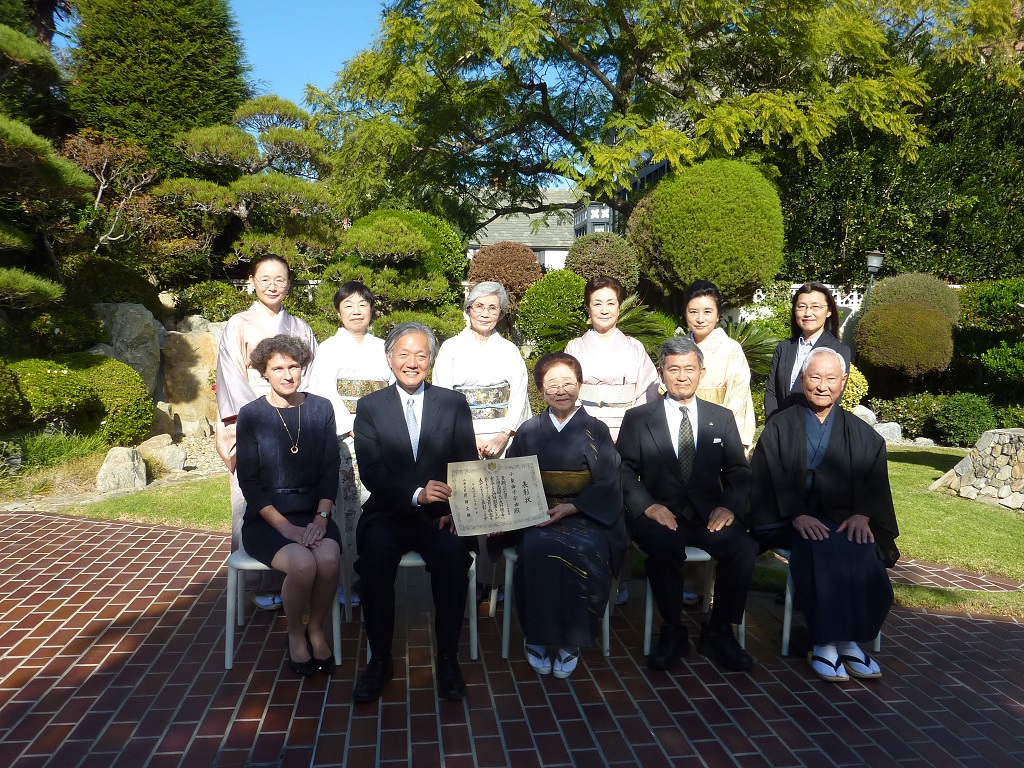 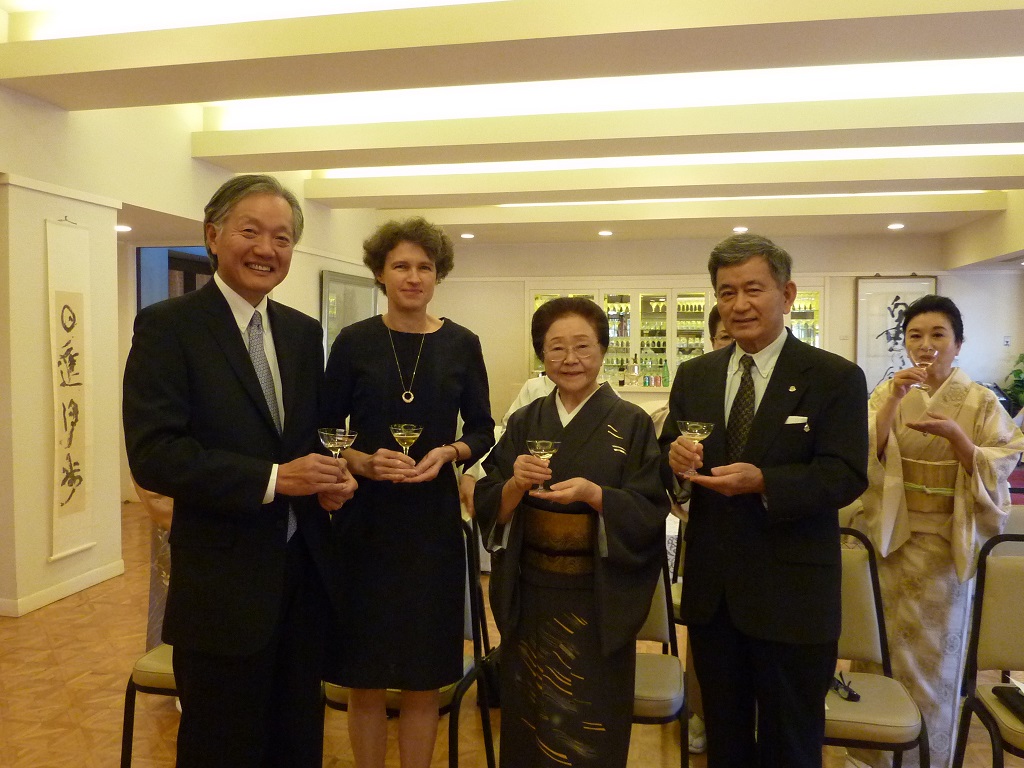